Daisuke Suzuki lost all hope when he saw the 15-meter (50-foot) wave engulf his family brewery and then again when he had to flee his hometown of Namie several days later as a 20-kilometer (12.4-mile) radius no-go zone was enforced around the nearby Fukushima Daiichi nuclear reactors following its catastrophic meltdown.

“Nobody would say it out loud,” Suzuki recalled on a recent trip back to rubble ruins of what remains of his destroyed 19th century sake brewery, “but we were all convinced we would never ever return to Namie.”

On March 11, 2011, Japan’s largest earthquake on record set off a tsunami that flattened much of the northeastern coast of Japan. It is that wall of water, and earthquake, that also led the nuclear facilities at Fukushima Daiichi, located only 6 kilometers (3.7 miles) from Namie, into becoming the site of the world’s largest nuclear accident since the Chernobyl disaster of 1986. 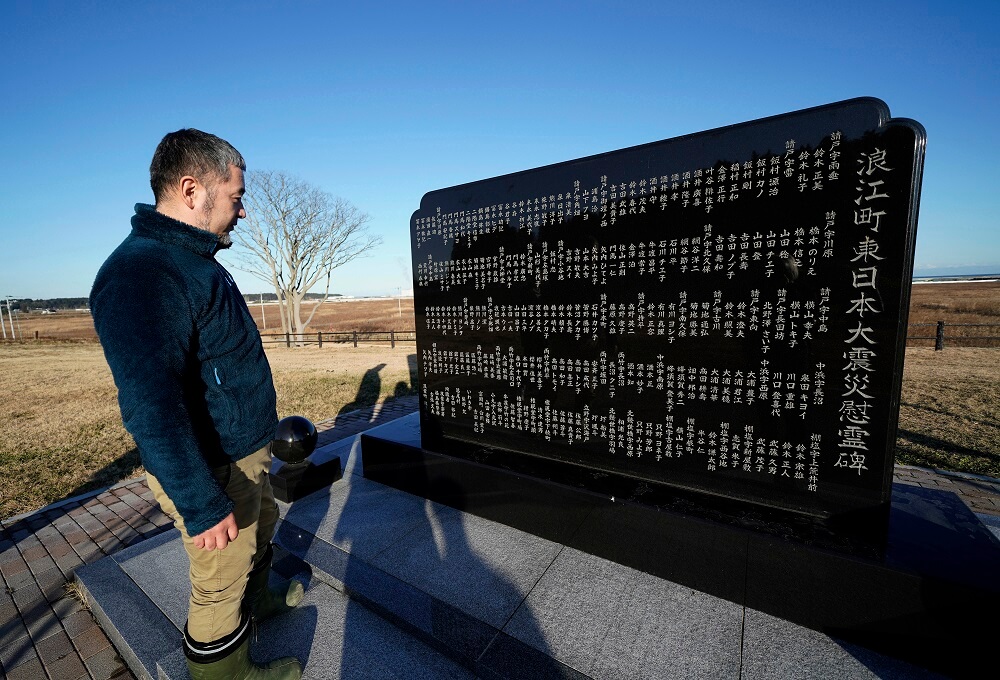 Nine years later, Suzuki is now making preparations to rebuild his business near his once-razed neighborhood and in the shadows of the still-crippled nuclear facilities. He wants to brew the same local libation made from same local Namie rice his forefathers had used for centuries before him, thanks to the lifting of the evacuation order around his town three years ago and the miracle recovery of his original starter culture.

“It was truly the coincidence of all coincidences that we had the starter culture with us,” said Kenji Suzuki (unrelated), vice director of Fukushima Technology Center.

The starter culture, also called a fermentation starter, is a collection of naturally occurring microorganisms and yeasts that help turn rice into sugar and then, eventually, that sugar into alcohol in a process that ultimately produces Japanese sake. 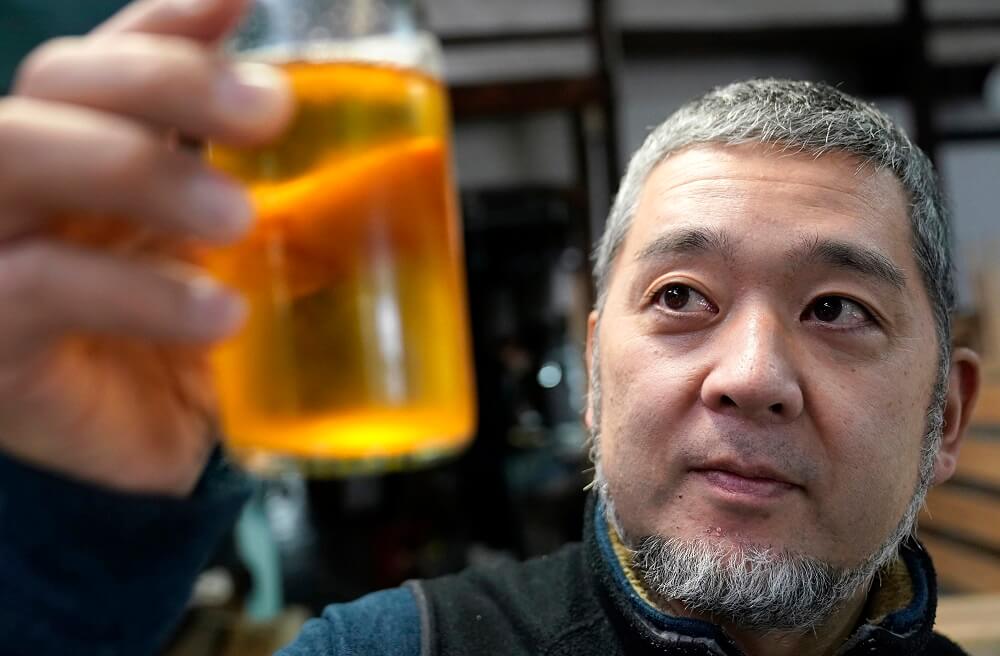 Called “shubo” in Japanese, or “mother of sake,” Daisuke Suzuki’s culture was specific to his brewery and developed over the centuries since Suzuki Breweries was founded in the mid-19th century to serve the fishermen of the port of Namie with a drink for their weddings, births and other celebrations.

Suzuki of the Fukushima Technology Center, which serves as a creation center of new yeasts and cultures for the local sake community, says Daisuke Suzuki sent his shubo to be analyzed just days before the earthquake.

That in itself was a fluke: The Fukushima Technology Center says they possibly get one starter culture to analyze every 10 years.

However, if Daisuke Suzuki had not sent his culture to the lab away from the path of the tsunami, there would have been nothing left to recreate. 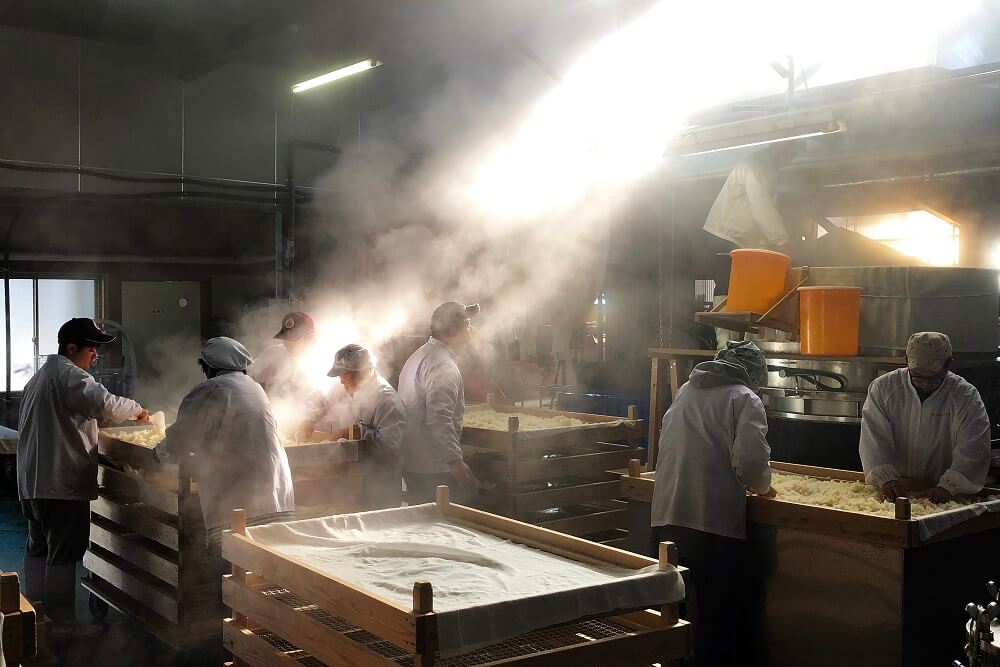 Now the master sake brewer makes regular trips back to Namie, some 160 kilometers (about 100 miles) from the brewery in Yamagata prefecture from where he currently works. With each visit, he collects the local source water that he uses with rice harvested in Namie to produce — with the miracle shubo of his ancestors — a new sake he labelled “Landmark.”

Hoping it will serve as a milestone in the recovery process of his community, Daisuke Suzuki is not taking any risks with safety.

For starters: The groundwater used for this sake is monitored hourly for radiation contaminants. The rice used also has to clear radiation checks far more stringent than required, as it is also the same Namie rice used to feed the local community. Finally, a final radiation check of the filled sake bottles is conducted before sending
them off to customers. 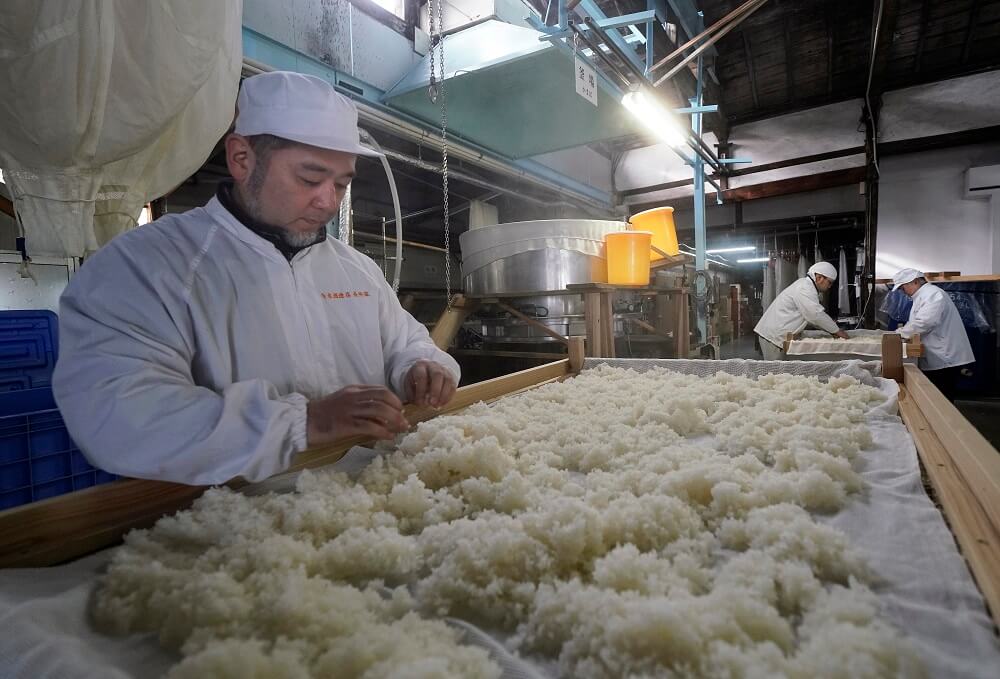 But he knows it will be hard to convince everyone of the safety of his product.

“I have every confidence that my sake is undoubtedly safe,” Suzuki said, “but all we can do right now is show people that we are working hard to ensure it is so.”

Ted Lazo, a leading expert on food safety at the Paris-based Organization for Economic Co-operation and Development (OECD), has visited Fukushima over 40 times since 2011 and says that, while the concept of safety can be a personal one based on the risks an individual wants to take, he agrees that locals have gone above and beyond international standards.

“The work that has been done in Japan to validate the levels of non-contamination of the food (there) is really exceptional,” said Lazo, deputy head of a division of the OECD’s Nuclear Energy Agency. 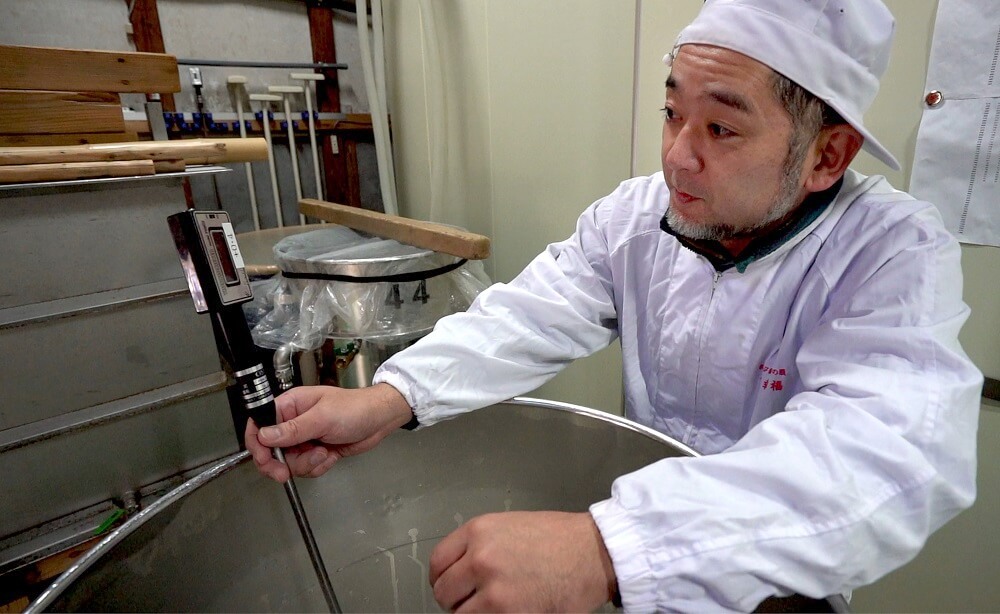 “The (Japanese) government and also private industry, distributors and even farmers are putting in an enormous amount of work to make sure that the products they are putting on the market are well within the 100 becquerel per kilogram limit and even, in fact, down to the 10-25 (becquerel per kilogram) level,” Lazo said, explaining that even the national levels are many times lower than those set for the voluntary Codex Alimentarius of 1,000 becquerel set for general foods.

The Codex Alimentarius is a set of international guidelines, standards and rules recognized for food production and food safety around the world. A becquerel is a unit of radioactivity that is used to measure radioactive contamination in food products.

Sary Sasaki, 33, a tourist of Japanese heritage from the Caribbean nation of San Domingo visiting a recent sake tasting event in the prefectural capital of Fukushima city, said she was initially concerned about radiation contamination before she came to this region. 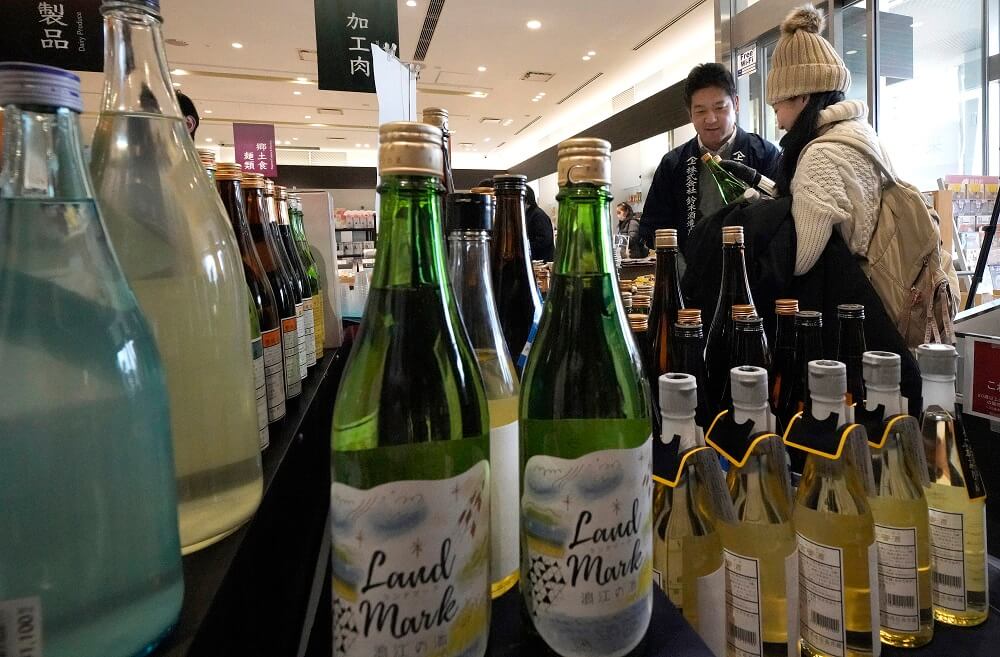 “After I came here … I saw all the work that was done to decontaminate; it was very impressive, “ she said, adding she was taking a couple sake bottles home to one of her uncles who is originally from a nearby township.

One U.S. citizen and local resident, David Benson, 27, who once had been a sommelier in Cincinnati, Ohio, was also at the tasting event.

“The facts are that the area is recovering, and it is totally safe. Unfortunately, it sometimes takes more than facts to convince people,” Benson said.

“The story of this sake, the effort people went through, has the higher potential of changing people’s minds,” Benson said. “And its terroir is the story,” he said, using a French term to describe the taste and flavors that come from the natural environment of a winery, before citing “Landmark” as an earthy and smooth sake.

“It is the perfect way to celebrate the reconstruction of the area,” he said.

However, Namie’s reconstruction has a long way to go before it can be celebrated.

About 1,189 or only 5% of the original 21,434 residents have returned to Namie since the exclusion zone was lifted three years ago. Town officials say lingering worries over the radiation in the area, a lack of large medical facilities and an acute dearth in commercial opportunities still inhibit many from coming back. 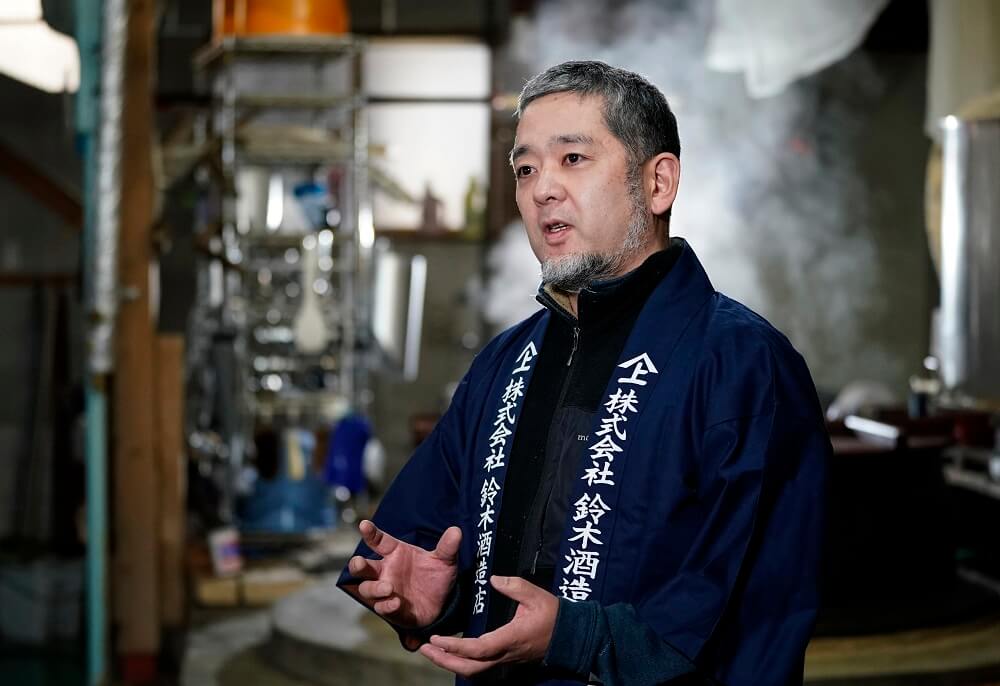 Daisuke Suzuki says he is aware that he can’t just return to recreate the past, but hopes his homecoming next year will also invigorate local businesses and convince new businesses take root, too.

“It’s not good enough to just continue what we used to do before the earthquake,” he said. “We will need to put our heads together and create something new.”

Produced by AP Content Services, the paid content service of The Associated Press. The AP news staff was not involved in the creation of this content.Interested in this content or ? Learn more and contact us here.

The pride of Fukushima 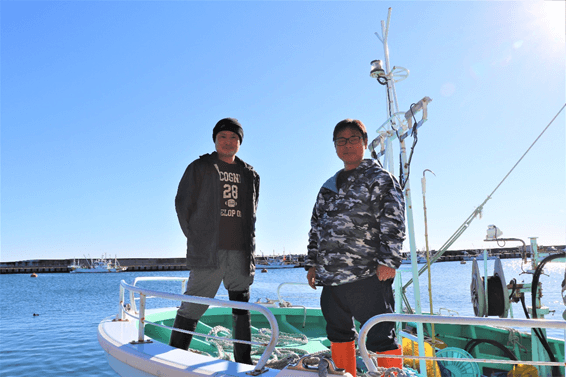